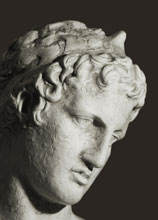 The Greek Workshop, a tradition at UC Berkeley for over thirty years, is suited to the needs of students with no previous knowledge of Ancient Greek but with some experience of other foreign languages. Students in the class learn Attic Greek, a literary dialect of Ancient Greek that developed out of the Greek spoken at Athens. It is the dialect of Plato, Thucydides, and Demosthenes. Attic Greek is only one of many dialects, but much of the surviving Ancient Greek literature is either written in it or influenced by it. Modern Greek has many differences from Ancient Greek, yet the influence of the Attic dialect can be seen even there after more than 2000 years.

While a rewarding, fun, and effective way for many students to learn Attic Greek, the workshop demands serious commitment. In addition to six hours of class work every day, students are expected to spend several hours daily in study and homework preparation. The Workshop replaces more than two semesters of elementary and intermediate Greek. Normally the class covers during the first six weeks the grammar that will be needed for the readings later, using Hansen and Quinn. During the second half of the Workshop, students read various texts in the original. The schedule is extremely rigorous, but students of the workshop almost always report that the experience was worthwhile and positive.

The classroom environment is intense but supportive, and every instructor holds daily office hours to offer further assistance. After the Friday lecture, there is always a short lecture and "Symposium" for students to relax and socialize.

After successfully completing the Berkeley Greek Workshop, students will be ready to tackle a third-semester Attic prose class such as Plato or Lysias or, with some motivation, an upper-level Greek reading course. The workshop is an excellent preparation for graduate language requirements in a number of fields.